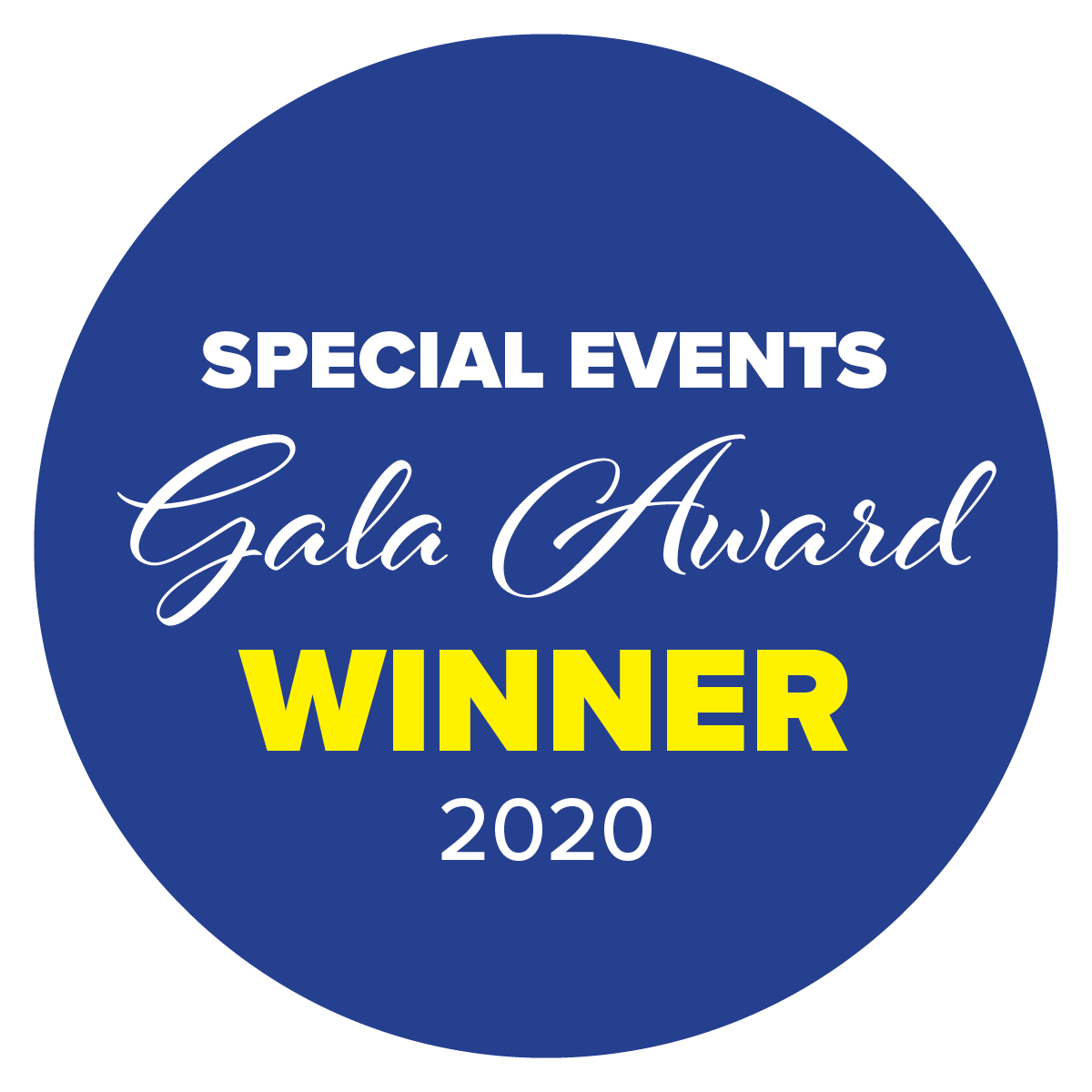 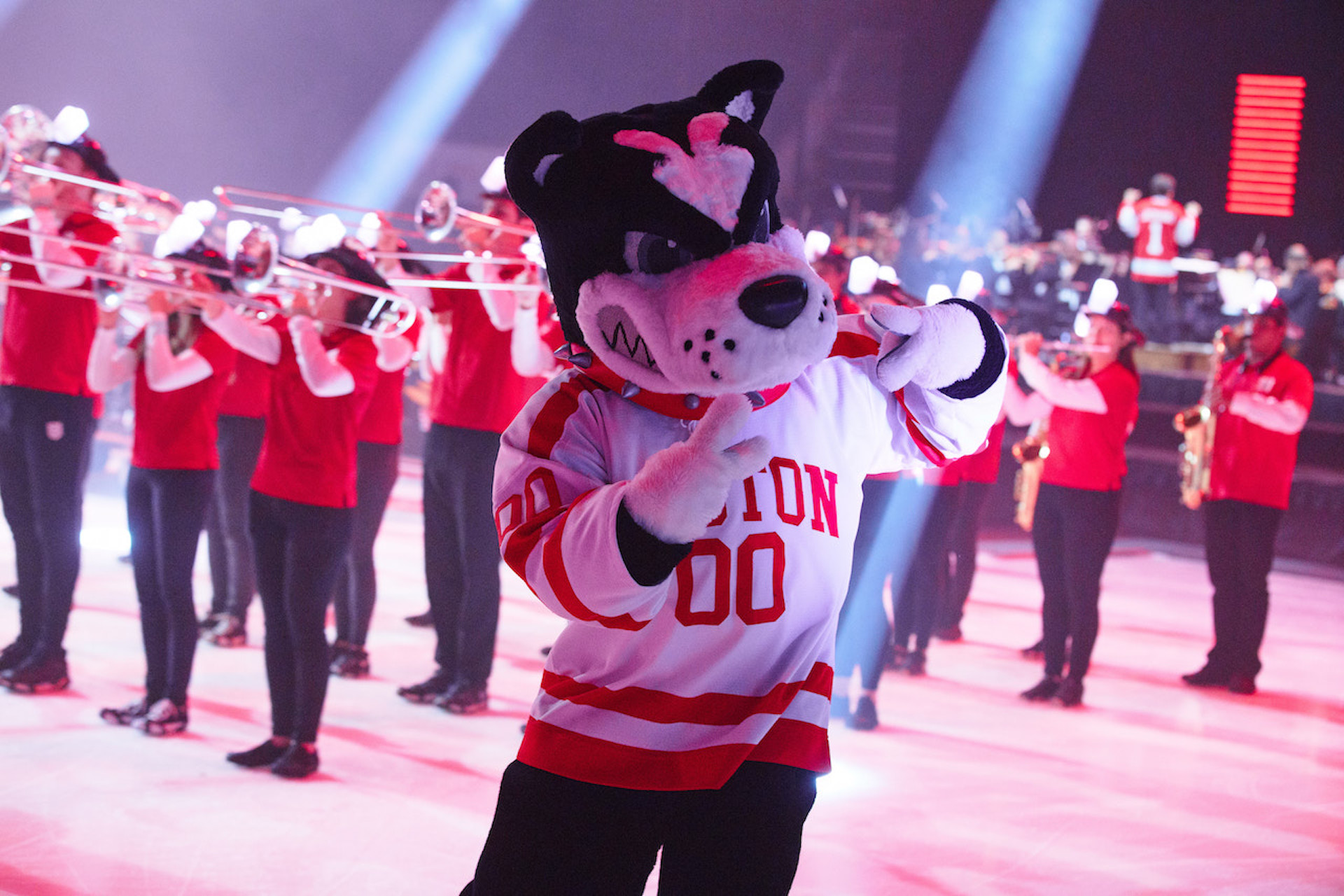 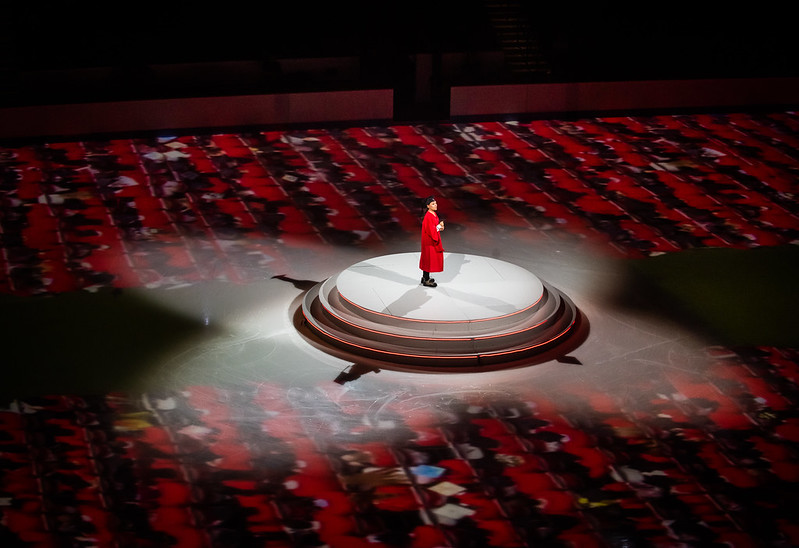 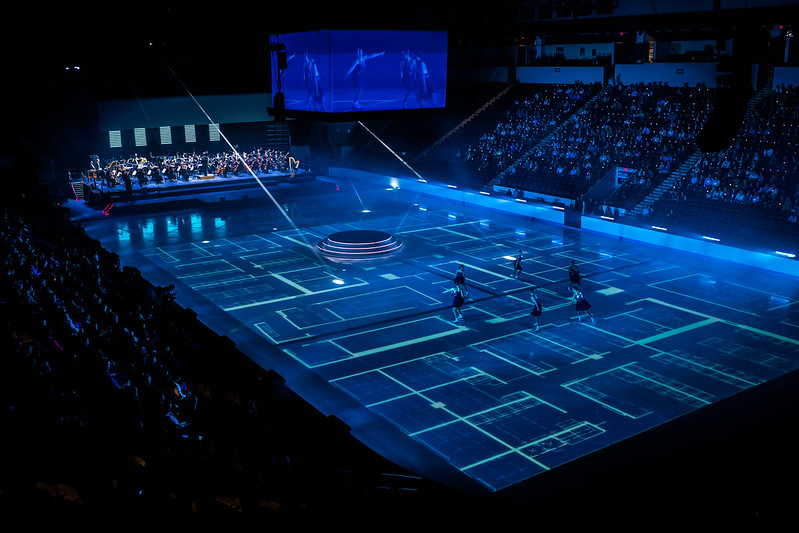 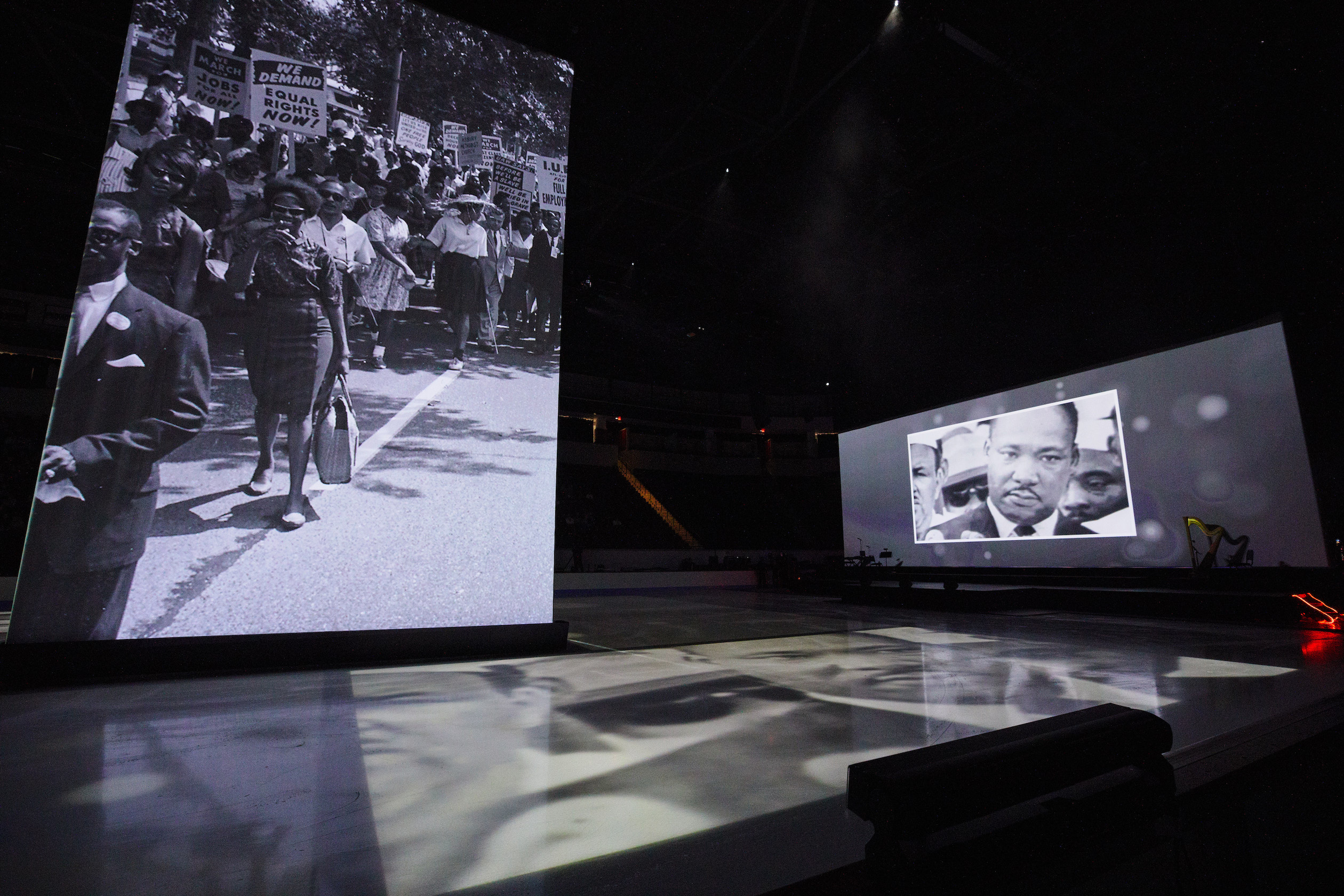 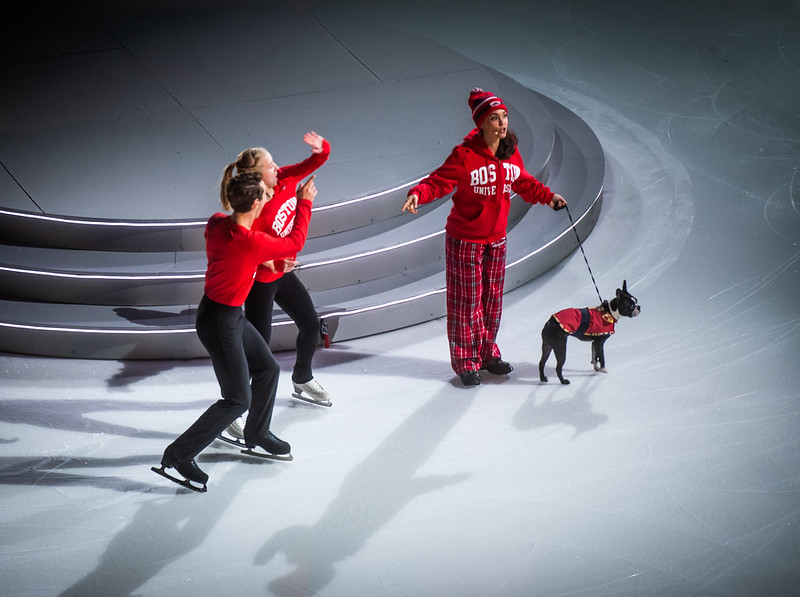 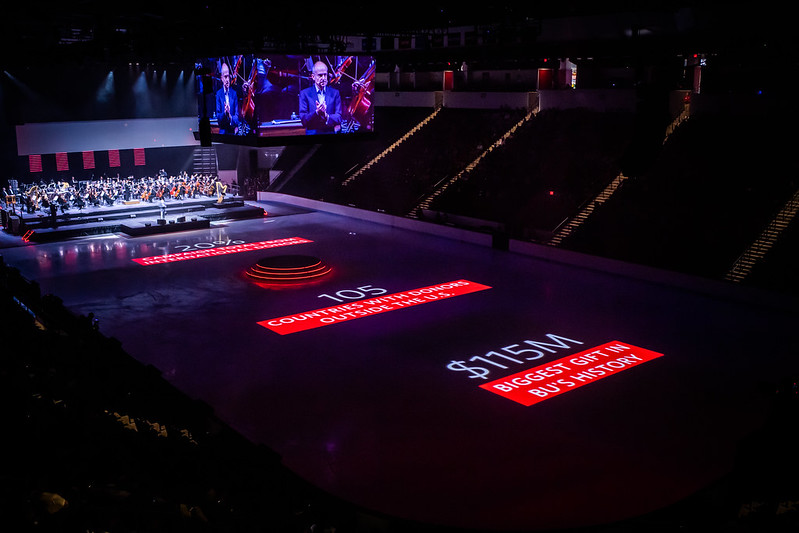 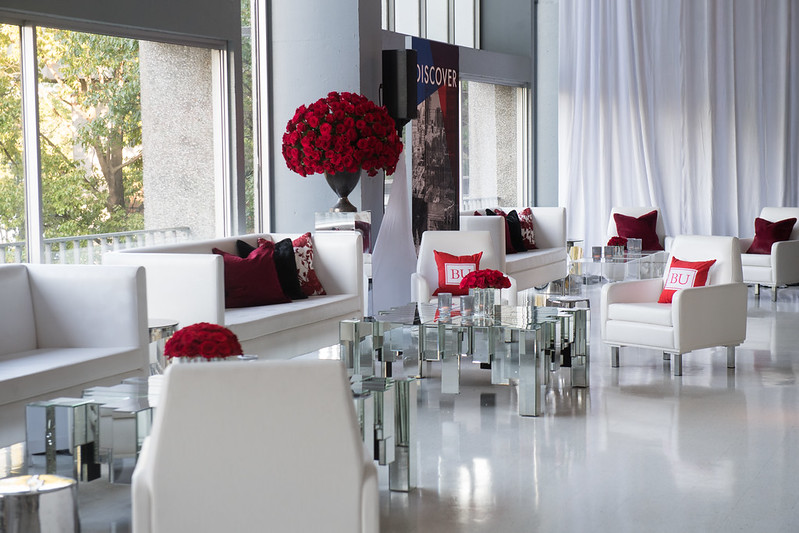 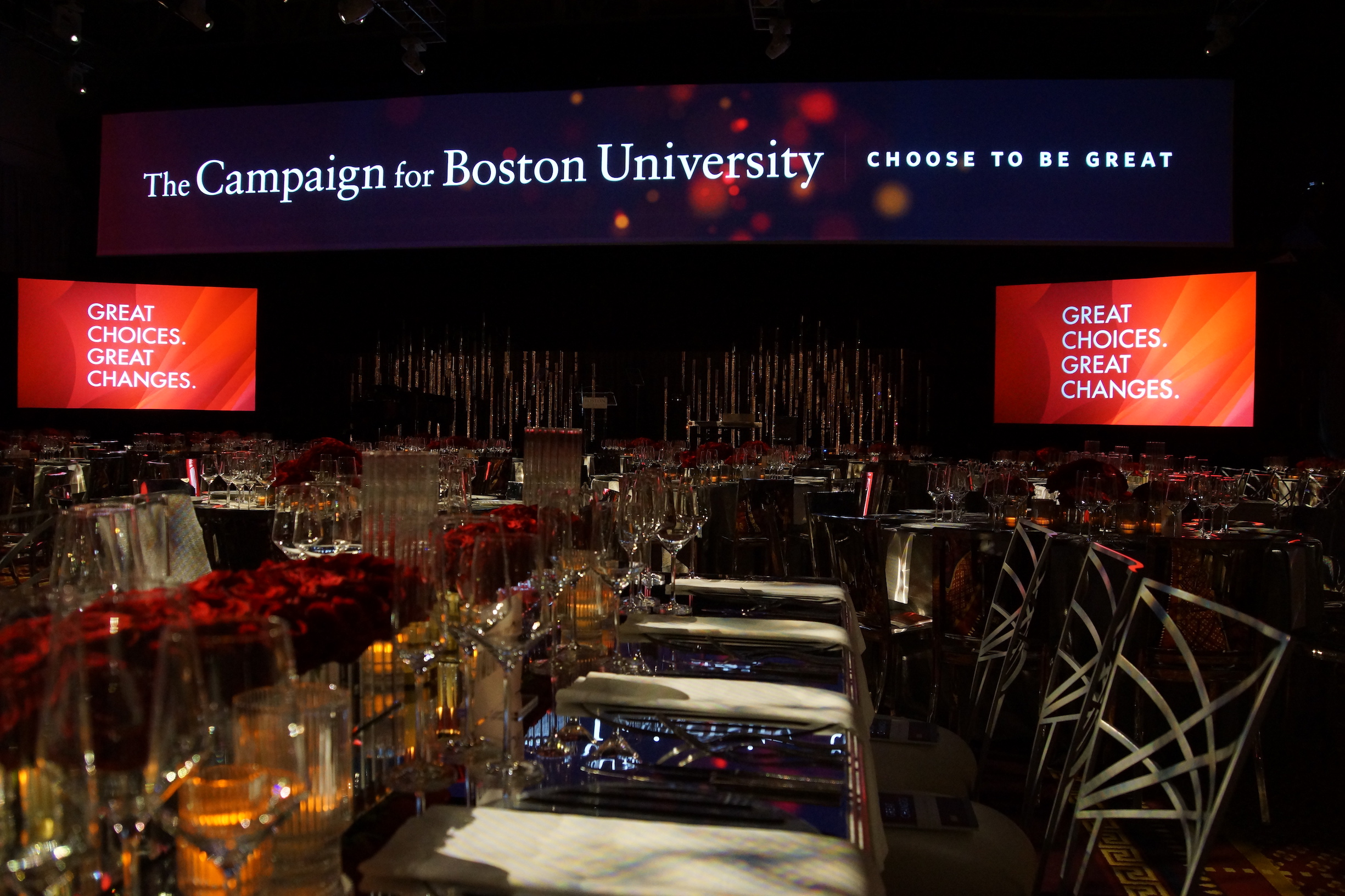 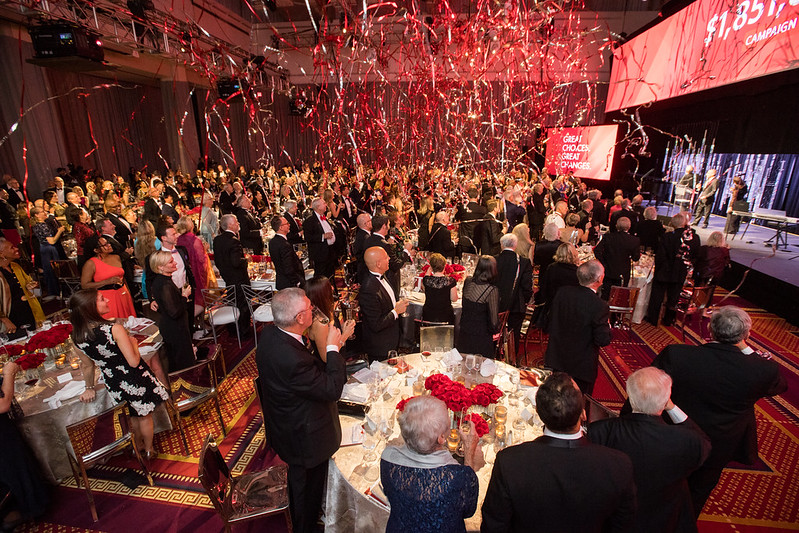 When Boston University concluded its first ever comprehensive fundraising campaign, Great Choices, Great Changes, in September 2019, it needed to celebrate the $1.85 billion-dollar achievement in a monumental way. BU engaged Stratelyst Creative to conceptualize and execute a 2-day Campaign Victory Celebration to celebrate this moment of pride through exciting, entertaining and unexpected ways that would be remembered for years to come.

Following weeks of discussions, the core team settled on utilizing the university’s original charter to serve as the basis of our story. Two evening celebrations would punctuate the weekend festivities – a Friday evening Gala to recognize the most significant donors and a community-wide Victory Celebration the following evening for 3000 attendees in an ice hockey arena. The egalitarian nature established in the founding of Boston University allowed us to create a narrative that was skillfully woven into the design, imagery, entertainment and storytelling of the two evenings.

The Friday, September 20 Gala took place in the George Sherman Student Union. There was concern that the student union felt “old and tired,” but we knew we could create an experience that was elegant and completely unexpected. With over 650 linear feet of black, white and gray drapery, the decades-old building was transformed from its stark interior into a modern, sleek and elegant space that delighted the guests. To hide the massive pipe organ that loomed over the main room, we had sewn a 70′ x 11′ custom screen onto which we project languid and immersive imagery that supported the evening’s messaging, including listing over 1,000 names of donors.

While there was one central stage in the room, in order to keep the evening feeling fresh we utilized multiple locations for surprise “pop-up” performances, including the staircase landing and even one of the camera platforms. The 100+ lighting elements, including 26 intelligent lights and over 50 custom, crystal LED mini chandeliers provided visual magic that supported the world-class entertainment and presenters.

The real surprise, however, happened immediately after the campaign total was  projected across the 70′ screen. Streamer cannons exploded above as the back of the room opened to reveal a dance floor, dessert stations and a lively band beckoning the guests to celebrate late into the night. The president of the university called the evening “absolutely magical!”

The Saturday evening Victory Celebration was held at the Agganis Arena, home to BU’s renowned championship ice hockey teams. This program featured over 400 performers including ice skaters, the BU Choir, the BU Band, the BU Opera, the BU Ice Hockey Club, ice-skating aerialists, America’s Got Talent Season 9 semi-finalists and BU alumni Sons of Serendip, multiple presenters, and the entire Boston Pops performing live to a 3D-mapped 90-minute show that dramatically unfolded across the ice and onto the custom built, retractable screen that stretched from the top of the arena and down to the ice below.

At the core of this entire program was the story that integrated BU’s history with the campaign initiatives. Through historical references, the story would go back and forth between BU’s past and the current campaign to illustrate BU’s tireless commitment to diversity, research, community, and an all-inclusive vision. Illustrious alumni were highlighted including Alexander Graham Bell, Alfre Woodard, Barbara Jordan, Olympic Gold-medalist Mark Eruzione, Martin Luther King, Jr. and many others. Our team was involved in every aspect of creating, designing, and executing these massive visuals.

The Boston University Campaign Victory Celebration is arguably one of the most technically advanced and emotionally moving programs ever created for an academic institution. Technology, storyline and showmanship were expertly combined to create a program like no other. In the short time since occurring, this celebration has been hailed as a game-changer. For its part, Stratelyst Creative was recognized for this outstanding achievement when Special Events magazine awarded it the 2020 international Gala Award for Best Event Produced for a Nonprofit Organization. 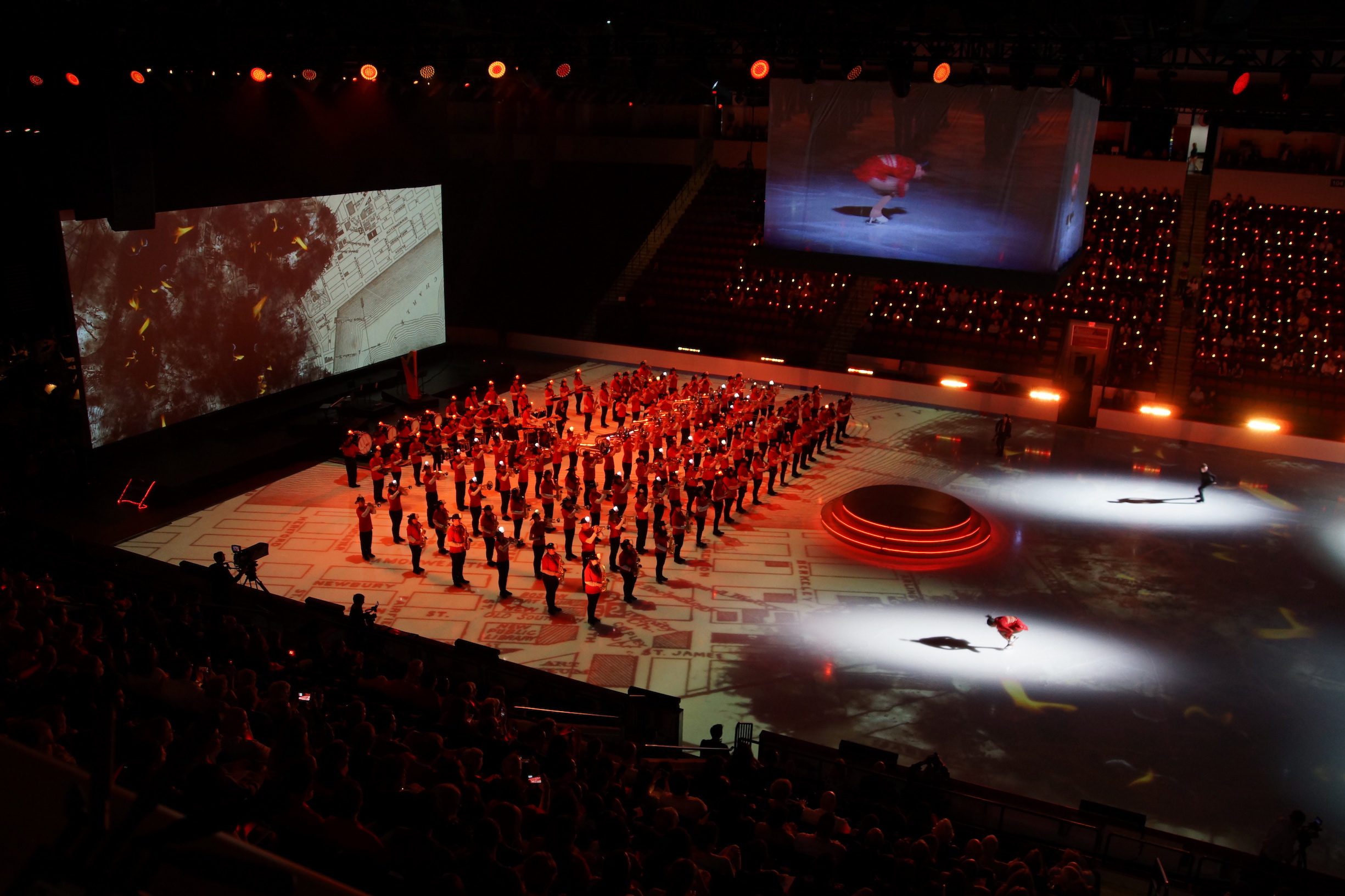